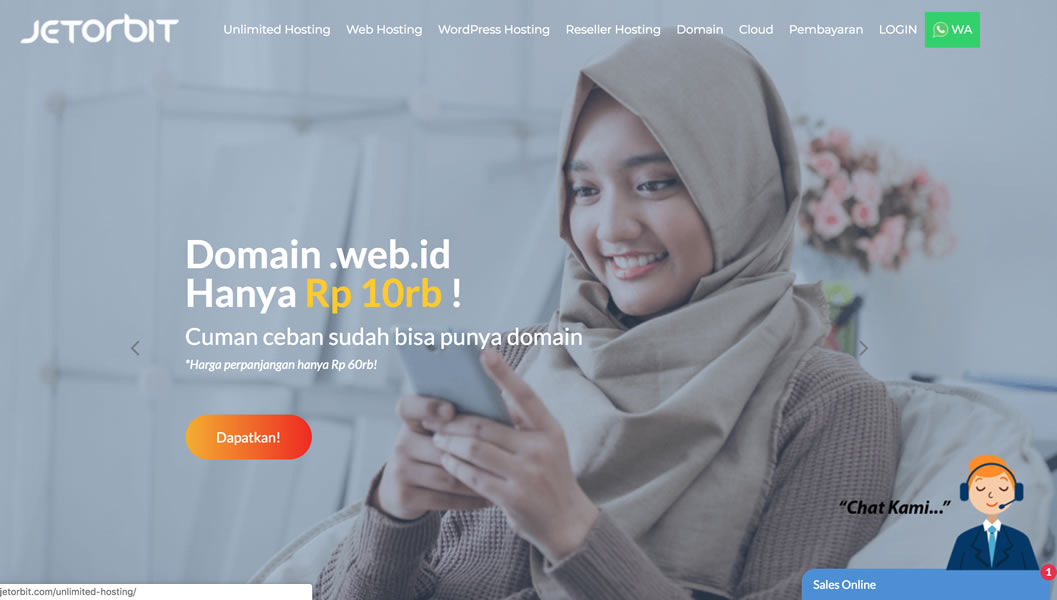 Although roughly five times smaller than the United States, it is easy to get distracted from Indonesia since it is made up of thousands of smaller islands in addition to its main land mass. That is probably one reason many people underestimate the consumer base there as well – currently at over 260 million.

Yet their profile in the technology sector has been rising and even Cloud service provider Alibaba has acknowledged. The company launched its second data centre in the country this year aiming to double their local capacity to cope with a massive growth in digitization there. Even more impressively, this launch took place a mere ten months following the launch of its first data centre in the country.

This and other factors indicate a digital landscape that is obviously exploding – the web hosting space being no exception. Battling against International web hosting companies have emerged local service providers, fighting hard for ground in this lucrative market.

I recently had the opportunity to speak with representatives of one such brand – Jetorbit. Operating under the legal umbrella of PT Jetorbit Teknologi Indonesia, they are a full-range web hosting service provider which started out in 2012.

Breaking in to a Crowded Industry

Stepping into a crowded industry, Jetorbit looked towards tapping local sources in order to fuel its growth. Their approach was to cater to users who fit two main categories – users who wanted affordable services in-country.

Their initial freemium strategy model which saw them offering free web hosting which came with resource limitations. The results were interesting, and the company saw over 100 new sign-ups within the space of a month.

At the time, Jetorbit was making use of U.S.-based data centres which was a slight issue due to their distance from the country. Even though they managed to offer server response times of around 190ms via optimized Los Angeles servers, users were demanding even faster speeds. The solution to this was to leverage on the Cloudflare Content Distribution Network (CDN).

Thanks to improved business, they have now complemented their U.S. server with a local data centre presence and are seeking to develop their own cloud to increase local usage. This will also help tap in to local users who don’t wish to host their data to any foreign provider, or whom might be required by law to host data locally.

With a handful of clients under their belt, Jetorbit knew it needed a much larger user base in order to survive. When they started out, the company offered shared hosting, reseller hosting and WordPress hosting – an extremely limited scope, even considering servicing international and local domain registrations.

In 2016 it stepped further into the business by offering managed cloud services under the jetvm.com brand. Their aim – to increase their product offerings and tap into the unique pool of users who demanded better quality hosting and yet didn’t want to deal with server management or maintenance issues.

Thanks to this, their user base grew to around 400 active clients and over 650 domains under management, with the majority being from within Indonesia. Their services now include reseller hosting and VPS managed hosting.

Their success in this arena has spurred them to look towards more partners who would leverage on their VPN business and offer it to their own clients. To date, they have already started working with website agencies and software development houses for this purpose. And they are hungry for more.

One example of their success in this area has been a partnership with PT Corocot, a boutique creative agency. The move saw Jetorbit take over as their technical solution provider for both web hosting and computing systems.

Jetorbit is now aiming at the coveted position of AWS Partner and as a pitch to corporate clients, are offering to help them move towards AWS. They are also attempting to simplify procedures so that smaller companies will have an easier time in launching their own websites to create a digital presence.

As of now, aside from the hosting and domain business Jetorbit is also open for custom website development, web app projects, as well as mobile app development (both iOS and Android). Although not a part of their core services, the move was made possible thanks to their close partnership with PT Corocot.

All of this has resulted in a solid base of products and offerings that they have to stand on. The result has been a steady growth and they are expanding to fill needs with an influx of remote and onsite hires. Their immediate aim – to boost their user base by as much as 200% over 2019.

As with every budding business, beginnings are lean times and there was no earmarked budged for marketing. Enterprisingly, the two co-founders sought out potential clients through local forums and even Facebook groups.

At that period (circa 2012) the local business landscape was already saturated by more established players who had been in the web hosting business for several years. Because of this, Jetorbit focused on the client experience and affordable pricing.

They were determined to make it and depended heavily on word of mouth marketing along with what partnerships they could muster to organically multiply their client numbers. Their keen hope was that through offering excellence in service, they wold not only be able to satisfy their custoemrs but also encourage them to contribute to a growth in the client base.

Their dedication was rewarded as they saw customers start to move towards Jetorbit from competitors, thanks to their support the tireless efforts given in assisting each individual account when needed. From ground up, they did their best to meet the needs of every client.

A big win was the gain of trust from the local blogging community. One success story involved a blogger covering the travel space who decided to move to VPN services offered at Jetvm. Even with over 50,000 visitors per day, the blogger remains happy with the quality of service and performance of Jetvm.

Today Jetorbit runs Google and Facebook ads as well as work with local bloggers and leverage on SEO to increase their image footprint.

Conclusion: What We Can Learn from Jetorbit

As a ground-up business that has managed to break in to an immensely competitive industry, I believe that there are many lessons which can be learnt from the Jetorbit scenario. No matter the size of the client base, one of the primary, undeniable facets of Jetorbit’s success lies in its attitude towards the customer.

User satisfaction is important and when their problems are properly addressed by the company they work with, it is very likely that their will bring their friends along with them. One of Jetorbit’s maxims is that they believe in real support that focuses on solving user issues.

One of the facts which I have always found to be strange is the attitude of many companies towards existing customers. They have this strange urge to continually expand their user-base at the cost of all else, even neglecting existing customers.

This is in direct violation of statistics which show that the cost of acquiring a new customer can be up to five times higher than keeping an existing one. True, market share growth is important, but surely a steady, long term relationship with existing customers should form the bedrock of any successful company?

The co-founders of Jetorbit may have come from a technical background but their success in organically growing a company in such a harsh environment is surely something that many companies – large or small, should take note of.

This year, Jetorbit is opening its first real office in Yogyakarta, Indonesia and they are opening their doors to all. Now that’s customer service.